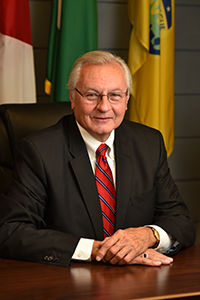 Ed Putens has been a resident of Greenbelt since 1970 when he graduated from the University of Maryland with a degree in Microbiology. He was also a member of the University's lacrosse team. He has worked in various research capacities for medical and research development companies and co-authored several patents dealing with minimizing air pollutants. Ed has lived in every part of the City, starting first in Springhill Lake (now Franklin Park); Charlestown North Gill Windsor Green and now Greenbrook Estates.

All three of his kids participated in the recreational programs offered by the City by the many volunteer organizations, soccer, little league, cheerleading, camp pine tree to name a few. He knows firsthand that it's vital for the city to provide continued assistance to these organizations so that other children have the same opportunity.

Putens has taken a leading role on senior citizen concerns and initiated a Senior Task Force, which led to establishment of the permanent Senior Citizen Advisory Committee. He proposed the City's Public Safety Advisory Committee, as well as the Advisory Committee on Education (ACE). He recognized the importance of inter-city cooperation between neighboring jurisdictions that he along with then Mayor Gil Weidenfeld approached this idea with the Mayor Joe Page of College Park which was the beginning of what is now known as the Four Cities Coalition which now includes is New Carrollton, and Berwyn Heights.

While on the City Council, Putens has served on county, state and national committees to represent Greenbelt's interests. Washington Metropolitan Council of Governments (COG), Prince George's County Municipal Association, Maryland Municipal League, and National League of Cities. He has served on the COG Human Resources and Public Safety Policy Committee. He previously served on the Transportation Planning Board. He has also served on several committees of the National League of Cities the Human Development Policy Committee, Public Safety and Crime Prevention Steering Committee, and the Finance, Administration and Intergovernmental Relations Policy Committee. He is the past Chair of the Small Cities Council Steering Committee (2006).