Stepping Together Towards a Sustainable Society 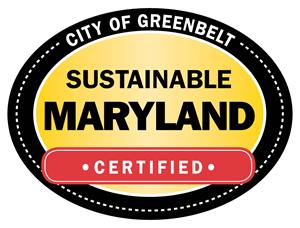 The City of Greenbelt takes pride in being socially and environmentally responsible, two things the community believes to be intrinsically interlinked. From recycling to bike paths and the overhead tree canopies in between, the city continually strives to live as green as possible. As the rest of the world progresses into a cleaner, more eco-friendly way of life, the City of Greenbelt plans to keep on evolving with it.

Greenbelt was one of nine Maryland municipalities to originally become Sustainable Maryland Certified in 2014, and the City successfully became re-certified again in 2017. To achieve certification, municipalities are required to form a Green Team comprised of local residents, community leaders, municipal staff and officials; complete a variety sustainability-related Actions worth a total of at least 150 points (including two mandatory actions and two of six priority actions), and submit the appropriate documentation as evidence that the Sustainable Maryland Certified requirements have been satisfied.

The City of Greenbelt has a fleet of environmentally responsible vehicles in service. The City is currently running three (3) compressed natural gas (CNG) vehicles: a Honda Civic, a Pickup truck, and a Dodge van; nine (9) hybrid Ford Fusions, two (2) hybrid Ford Escape; and one (1) all electric Gem Polaris. In 2017 we acquired two (2) more hybrid Ford Fusion.

This summer (2018) the City of Greenbelt added 3 new Chevy Bolts to its fleet.  Two of the cars are being used by City Code Enforcement to make their inspection rounds and the other is with the Department of Public Works.  The electric cars are part of the City's commitment to utilize alternative fuel and powered vehicles whenever it is feasible and a car is replaced in its fleet.  Look for more electric cars around the City in the future. 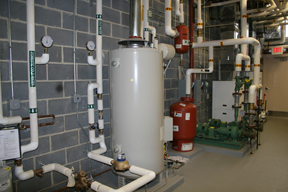 City facilities in Greenbelt also maintain a high level of environmental responsibility. The new Public Works facility will be a green building, using 70% of materials recycled from the site of its demolition. The facility will rely on geothermal energy for heating and cooling, as well as energy efficient lighting, with automatic on/off settings and light sensing.

The City of Greenbelt started buying wind generated electricity in 2009 (15% of the City's consumption), the City continued until 2011, when we switched to 100% wind energy supplied by our electricity provider. Greenbelt is committed to reducing our carbon footprint by lowering our electricity consumption and by obtaining 100% of our energy from renewable resources. The City of Greenbelt has been an EPA Green Power Partner and a Green Power Leadership Club member since 2014.”

The facility's Energy Efficiency Program is an ongoing process to continually upgrade the lighting. The now recently completed energy efficiency audit (conducted by Chevron) will continue to implement recommendations over the next few years.

Free viewers are required for some of the attached documents.
They can be downloaded by clicking on the icons below.